DAY OF THE DEAD

What would happen if we were to celebrate the passing of life rather than mourning the loss of someone?

How would you be remembered and what would you like to leave behind in the world? 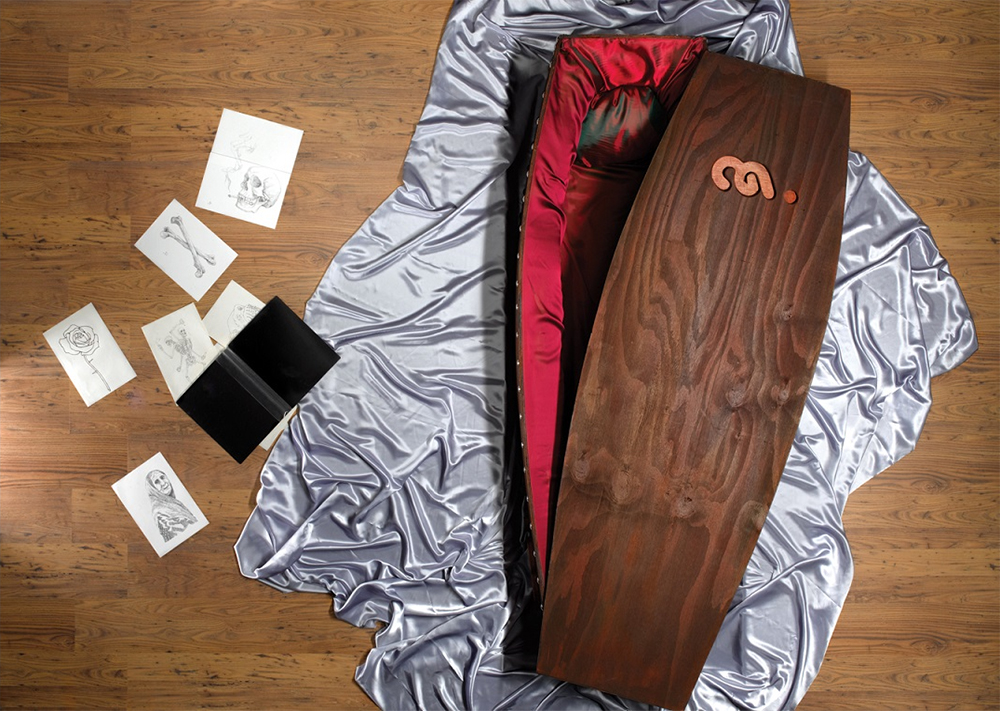 Conquer has a history of posing intriguing questions in what might seem to be a fun and playful manner. To reflect on a reality that is far from perfect but with a sense of joyfulness.

What can be more certain and final than death itself and how should that affect how we live our lives?  Some cultures celebrate the passing of life and remember their dead conducting huge celebrations that reflect the importance of the ones we love.

The Day of the Dead can teach us something about ourselves and why we should try and live each day as if it could immortalise us in the eyes of those who love and admire us.

Here are people that inspired us, that made us want to ask why they were driven to make the things they did. Whether they had ever wondered what would happen with it after they were gone! Their answers were even more than we expected! 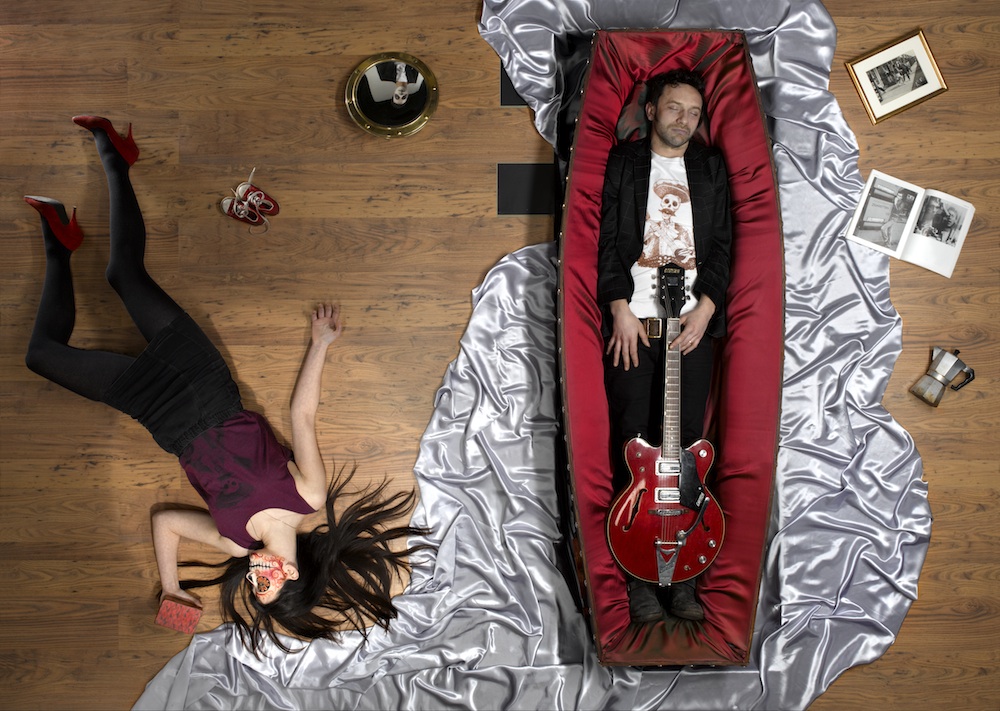 8 members of a band that take their name from the cult TV show Twin Peaks and have their own Mariachi horn section. This is Rock but with something quite refreshing. How they are not yet in a Quentin Tarantino soundtrack yet is beyond us. Paul Van Oestren and Catherine Turner took a moment to reflect on one of their favourite celebrations, The Day of the Dead, and shared a few bits about what drives their music:

“Bookhouse boys: I think you could drive yourself insane if every time you create something , everything you do you think of it as something that must represent you entirely and totally. Apart from the fact that you can’t because as a person you constantly evolve.  If you approached it like that I don’t think you can ever really be happy with what you’ve created. Or enjoy it while you’re alive.”

“I think you have to create. Life pours so much into you that there has to be some way of letting it out and I think the fact that that’s left behind when you’re dead is almost a secondary thing.”

“I think it’s important to think about the things that scare you the most. If death is one of them find a way to make it a beautiful thing almost.” “because it’s part of Mexican culture I think that probably helps them not fear it.” 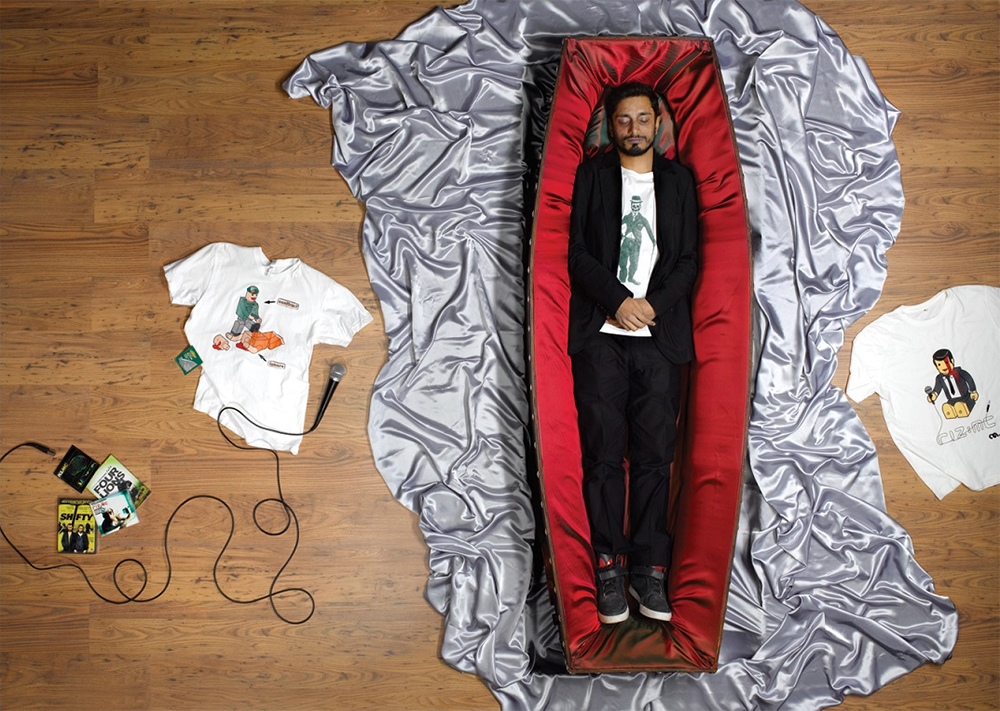 Long time Conquer Gear collaborator and friend, Riz Ahmed is the man behind iconic film roles in Four lions, Shifty, Road to Guantanamo and Ill manors. While also making time to have his own music label putting out thought provoking music. With lyrical content as sharp as a razor he leaves quite the impression and isn’t scared of expressing the odd sociological insight.  He can’t be stereotyped, we thought he’d be the perfect man to muse over life and death with:

“Something you leave behind, even if it just lasts for the week after you’ve died. Leaving something behind, leaving a bit of yourself I suppose it’s quite egotistical in a way. I suppose it’s quite a natural drive as well. I’m one of those weird people that whenever I get on a plane I’m sure it’s going to crash and then just before take off I try and get into a spot where I feel at peace with the fact that I know the plane is going to take off and then it’s going to crash and we’re all going to die. It must have been a strategy to get over fear of flying as a kid. From those little thought experiments I get to feel like that if I died at this point in my life I’d die happy.

Social media, “It’s designed to outlive us and to be seen by everyone, it creates a kind of weird thing, and kind of fictional digital file that we make more substantial than us; because everyone in the world can see it and it will last forever. In this weird sense our facebook pages overtake us.” “our Pharaohs tombs” 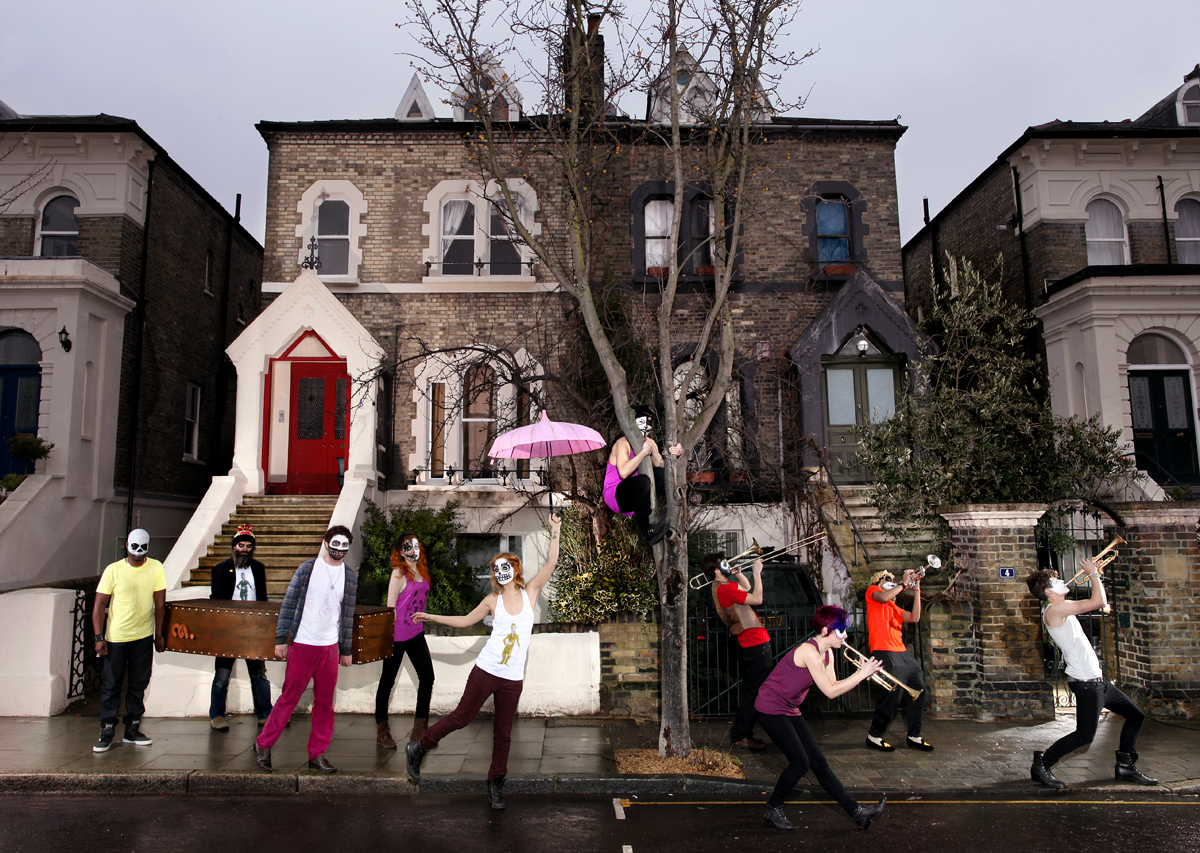 We wanted to create a homage to our species creativity, our need to create is fascinating. While most don’t think of what will come after us, we are looking for the positives of what can be left behind to inspire the next generation to make from their own interpretations. The skull in mexico represents eternal life, not to live forever but also to live well now as to be brought back to life after your passing in the celebration that is Day of the Dead.

Lets celebrate what’s gained, not mourn what is inevitably lost! 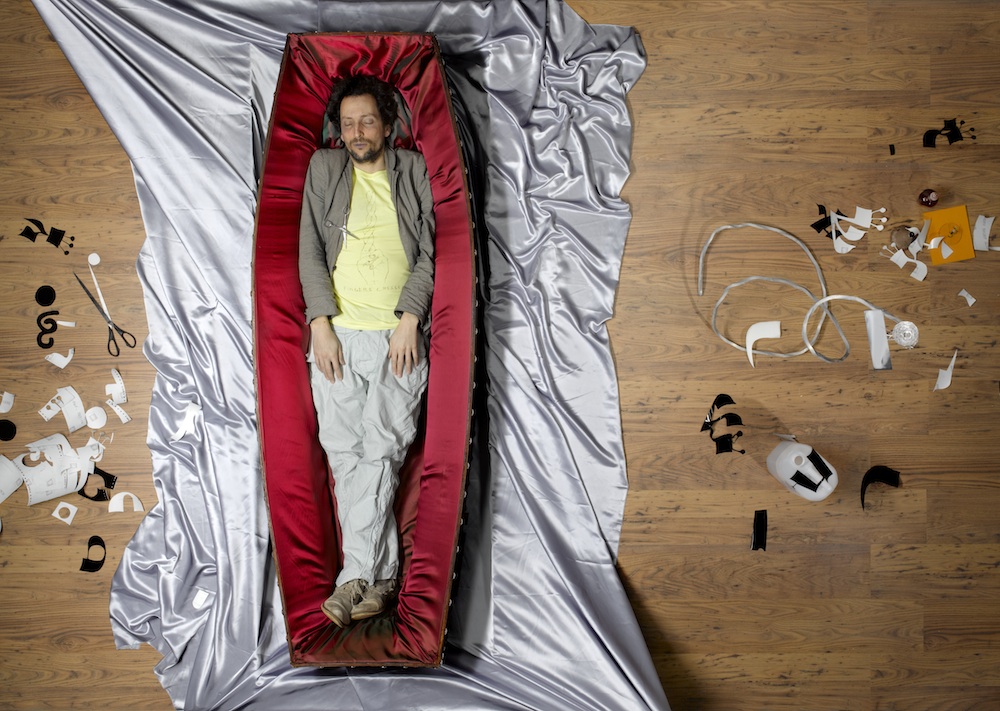 An artist that holds up a lens to the world, A humbly wise man with a back catalogue of fascinating stories. He is a massive inspiration to us, and probably anyone else that has had the chance to muse over life with this unique individual. Working as a Jewish scribe for a time in Israel left a massive impression on his life. He then channelled his creativity and delicate skills into art. But uninspired by the art world’s obsession with found objects and lack of skilled artistry he is more inspired by craft. He could be considered an instrument maker, creating pieces with functionality as well as aesthetic merit. Their dependence on human interaction gives them a certain morality which rings true with our own ideas of the finite reality that surrounds us:

“We remind ourselves that we’re mortal to give life a kind of meaning, maybe if we were immortal we’d just be endlessly destructive, we’d go about destroying things all the time just to test our immortality…”

“In the middle east where there’s always the threat of war you almost feel more alive because there is always death around, that’s the basic equation, you live in this big house in the suburbs and you feel like you’re slowly dying. That’s the trick isn’t it?

“I think my position with art is I am somewhat ambivalent. I kind of have a problem with it and yet I’m sort of drawn to it…and I almost think that I’ve tried to make my ambivalence part of the work, I was always criticizing college for not being clear about what it is you’re making. I did this interview with a man who makes cello bows, a  bow maker, an instrument maker, he’s actually a well know jazz guitarist. A cello bow is a very simple thing to look at, and he spends his whole perfecting this one object. I thought that was quite interesting in contrast to all these art students. I had just felt like so much of the craft had gone out of it.”

“The truth is if you want to be a watchmaker now you go and work for Rolex, they teach you how to drill one component and you do that for the rest of your life. I tried to think about what makes a watch so compelling. It is like a being.. you wind it, you give it life, you wind it up and slowly it depletes. You get the pulse, that heart beat. The whole art of watch making is how not to let the spring unravel immediately. That’s what an organism has to do. An organism gathers itself, at some point it has to develop a heart, so it can live long enough to find another organism, it can move in with it and have a little organism family.” 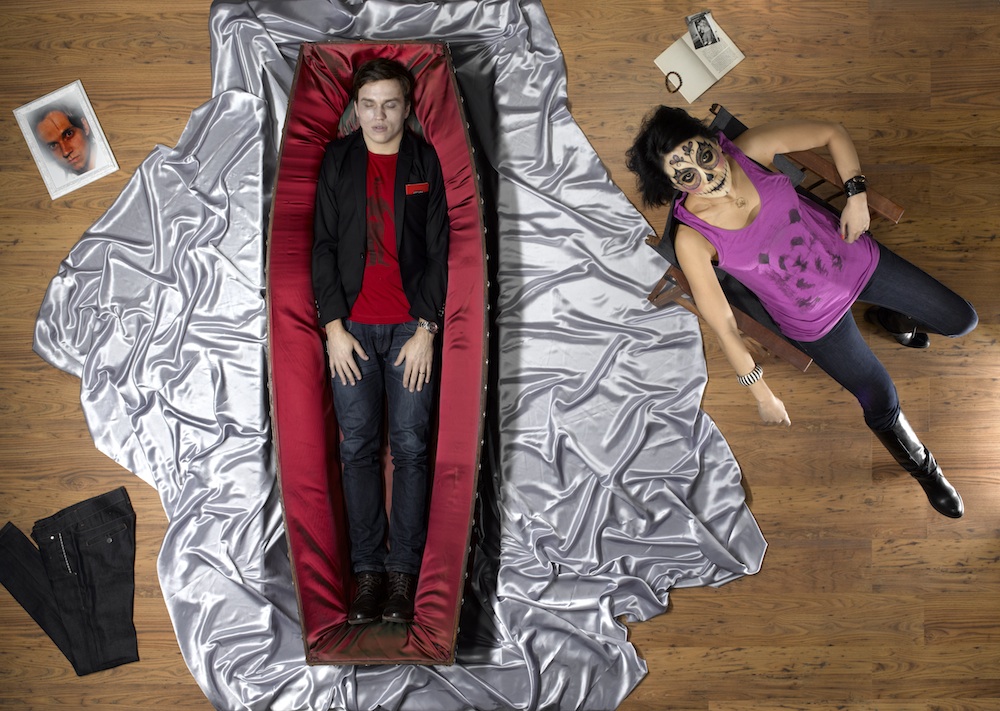 Trousers London was always going to be a different type of fashion brand. Founded by two architects they don’t follow the tight rules of quick throwaway fashion. Function is deemed as important as form, they have built ethical trousers to last. Deciding to break from the traditional seasonal ware, the mass produced clothes that dominate today’s fashion market. To create instead timeless and lasting items that can be treasured, worn and re-worn by their owners. Somthing designed to have many lives as they age:

“We’re dealing with fashion instead of static buildings, it’s got a personality once it’s worn. Buildings are made to be lived in just like clothing. First it’s an object and then someone moves in.”

“Build something for yourself. Otherwise you spend your whole life working for someone else, you’re basically building up their dream, you’re putting all your time and energy into someone else’s idea as it’s always better to take time to focus on your own goal. To be free.”

“I wouldn’t say I’m very frightened of death itself, I usually think about what happens to the people who stay behind. What do they do? What happens with their lives?”

“Whatever interests you now has been influenced by what has come before. It’s the ongoing story. You don’t know where it begins or ends. Now is always now isn’t it?” 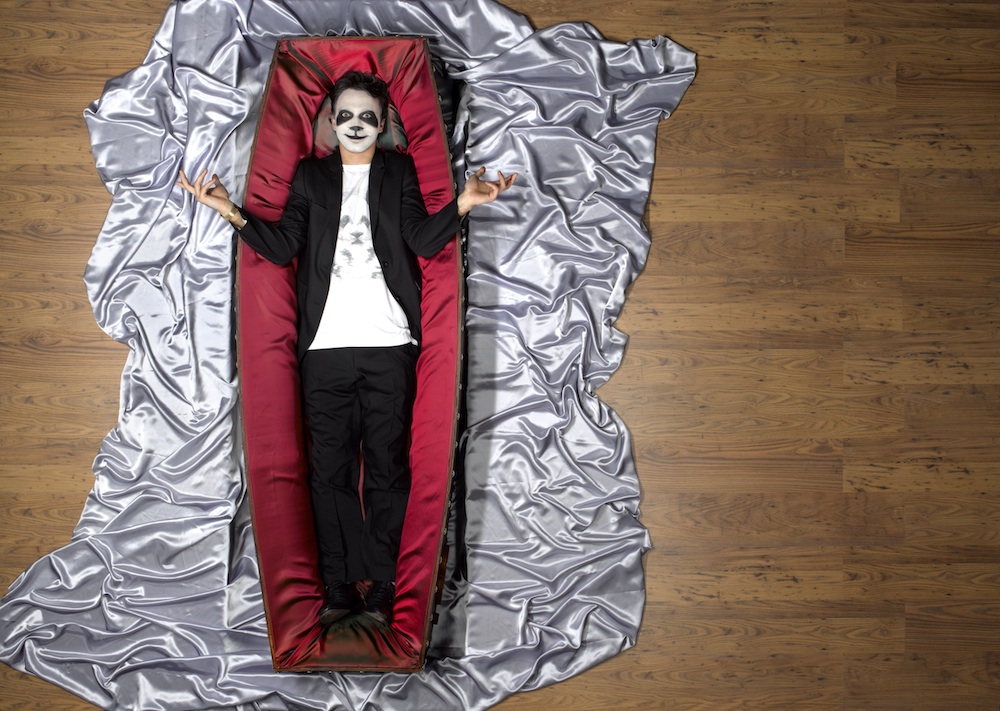 Design by Design by Hassanayn Rauf of Mansions of Wickedness